On Happiness and Love ~ by Albert Camus 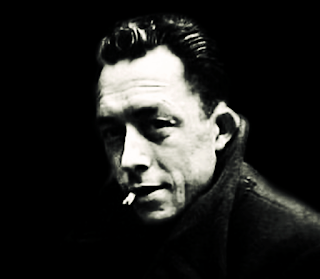 On Happiness  and Love *
~ by Albert Camus ~

If those whom we begin to love could know us as we were before meeting them … they could perceive what they have made of us.

When love ceases to be tragic it is something else and the individual again throws himself in search of tragedy.

Betrayal answers betrayal, the mask of love is answered by the disappearance of love.

For me, physical love has always been bound to an irresistible feeling of innocence and joy. Thus, I cannot love in tears but in exaltation.

The loss of love is the loss of all rights, even though one had them all.

Those who prefer their principles over their happiness, they refuse to be happy outside the conditions they seem to have attached to their happiness.

It is not humiliating to be unhappy. Physical suffering is sometimes humiliating, but the suffering of being cannot be, it is life.

The end of their passion consists of loving uselessly at the moment when it is pointless.

At times I feel myself overtaken by an immense tenderness for these people around me who live in the same century.

Sonnet 145 ["I hate ... not you”]
~ by William Shakespeare ~
////// ==== \\\\\\
Those lips that love's own hand did make
Breathed forth the sound that said "I hate,"
To me that languished for her sake.
But when she saw my woeful state,
Straight in her heart did mercy come,
Chiding that tongue that ever sweet
Was used in giving gentle doom,
And taught it thus anew to greet.
"I hate" she altered with an end
That followed it as gentle day
Doth follow night, who, like a fiend,
From heaven to hell is flown away.
"I hate" from hate away she threw.
And saved my life, saying "not you." 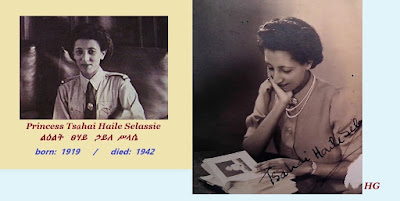 Canada and the Canadians have shown so warm and friendly an interest in Ethiopia;  so many Canadians have held positions there under the Ethiopian Government, that I venture to make through your Journal an appeal on behalf of a project which I feel will have the sympathy and support of your readers.

I am sure they will remember the sad plight of Ethiopia in 1935 when she was invaded by the forces of Mussolini,  powerfully equipped with modern arms against which she had no adequate defence.  At the time the heroic courage of the young Princess Tsahai, The Emperor's daughter, then only 16 years of age, was  outstanding.  Her eloquent broadcast appeal against the use of poison gas was heard in London.  In Addis Ababa, she organized the Ethiopian Women's Work Association, and led her compatriots in the manufacture of gas masks, bandages and comforts for the troops.  On arrival as an exile in London, she entered the Children's Hospital at Great Ormand Street where, after three years' devoted service, she qualified as a State Registered Nurse.  She then proceeded to Guy's Hospital for post-registration training.  She was at Guy's during the great air raids when she displayed both courage and a capacity for leadership.

On returning to Ethiopia with a unit of British Red Cross Nurses, she performed a great task in establishing an orphanage for children whose parents had been killed in the war, and in opening numerous hospitals and clinics.  Most tragically she did more than her strength allowed.  She died suddenly in a remote province for lack of the skilled aid she was endeavouring to bring to others.

It was felt by those in Britain who realized the great loss that the death of this young Princess would mean to her country, that a Memorial Hospital should be raised in Ethiopia to continue her own great efforts.  The formation of the Princess Tsahai Memorial Hospital Council in London was gratefully welcomed by Their Imperial Majesties, The Emperor and Empress, who graciously consented to become Patrons of the Hospital.  The Archbishops of Canterbury and York, leaders of other Churches, and the Ambassadors of the United Nations consented to be Honorary Presidents;  leaders of the medical profession, universities and schools, with prominent social workers, accepted the office of Vice-Presidents.  Upwards of £50,000 was raised for the project in this country, and a   similar sum in Ethiopia itself.  Her Majesty, The Queen, graciously honoured the Fund by a donation of £100.

The Hospital is now complete and the official opening took place on November 2.  Colonel W. Byam, for twenty-five years Lecturer on Tropical diseases at St. George's Hospital, London, and with Sir Robert Archibald, Editor of "Practice of Medicine in the Tropics", has accepted the position of Director of the Hospital.

Further financial support is urgently needed.  The Memorial Hospital Council in London requires a further £1,500 to pay for goods already sent to Addis Ababa; moreover, still further equipment is required, for the Pharmacy and Laboratory in particular -- both of which are vital.

The Princess Tsahai Memorial Hospital is destined to be of immense importance to Ethiopia in the training of nurses and, subsequently, of physicians and surgeons, in co-operation with the new University College and its Canadian director.  Special attention to research into the treatment of tropical diseases will be given under the auspices of Colonel Byam who has made this his life study.  Such research will be valuable to all who live in all the tropics.  Ethiopia is in the unique position, owing to the various altitudes and their respective climates, of affording opportunities for the study of all the tropical diseases. 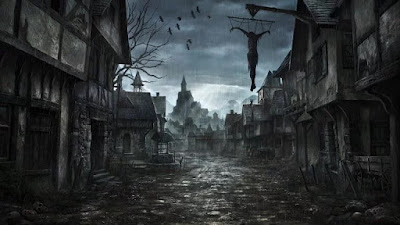 Can I do anything with a word when the world is sparking
through wires and cables and atmosphere crackling on screens
drawing current from electrochemical Homo sapiens?

Can I do anything with a word when the chemicals come so easy
and hit so hard and run so fast and shoot so high and last so long?

Can I do anything with a word when art is for intellectuals
and commoners are jettisoned to their easy pulp?

Can I find a word that will cut through meanness
and shame power lust and inspire the meek
and disable the unjust and pull the disguise off everyday life?

What can I do when I am tortured by the mind
and bleeding from the heart and enslaved by the logical
and brainwashed by the desirable and distracted by discourse
and people are dying in droves and killing is a political option
and this is the real world and Jesus has already come and gone
and the kind-hearted are cheated and the vicious are prosperous
and I am honest by accident and duplicitous by nature
and into the night I lie awake searching for a word?
Posted by T P O at 4:17 PM No comments: 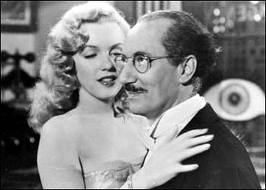 At an unknown location, date, and time ... some unknown small group of friends were partying and having a good time! == ጥሩ  ጊዜ !!!

The Wit of Edward Gorey - by TPO 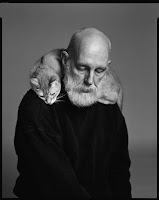 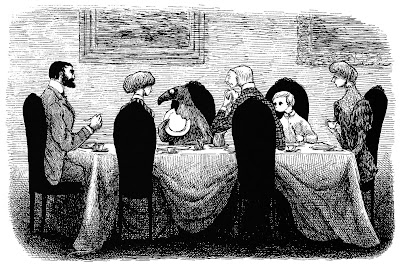 << A beautiful example is his early book “The Doubtful Guest” (1957). Here, members of a respectable Victorian family are standing around one night, looking bored, when their doorbell rings. They open the door and find no one. But they scout around the porch, and finally, on the top of an urn at the end of the balustrade, they see something peculiar. It sort of resembles a penguin. On the other hand, it has fur and wears white sneakers. In any case, by the next page it is standing in the family’s foyer with its nose to the wallpaper, looking frightened but insistent, while they huddle in the next room, trying to figure out what to do. By the morning, the creature has made itself at home. An illustration shows us the family at the breakfast table, in their tight-fitting clothes, acting as though everything is perfectly fine, while the Guest, seated among them, and having finished what was on its plate, has begun eating the plate.