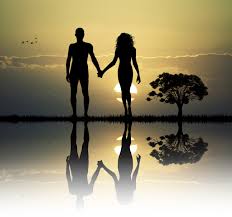 We hunted for it, but could not find it.  Adam said he had heard it before, but had never seen it, though he had been quite close to it.  So he was sure it was like the air, and could not be seen.  I asked him to tell me all he knew about the Voice, but he knew very little.  It was Lord of the Garden, he said, and had told him to dress the Garden and keep it; and it had said we must not eat of the fruit of a certain tree and that if we ate of it we should surely die.  Our death would be certain.  That was all he knew.  I wanted to see the tree, so we had a pleasant long walk to where it stood alone in a secluded and lovely spot, and there we sat down and looked long at it with interest, and talked.  Adam said it was the tree of knowledge of good and evil.

Of course I had none, and it was unreasonable of me to require him to have one.  There was no way for either of us to guess what it might be.  It was a new word, like the other; we had not heard them before, and they meant nothing to us.  My mind kept running on the matter, and presently I said, "Adam, there are those other new words - die, and death.  What do they mean?"

"I have no idea."
"Well, then, what do you think they mean?"
"My child, cannot you see that it is impossible for me to make even a plausible guess concerning a matter about which I am absolutely ignorant?  A person can't think when he has no material to think with.  Isn't that true?"
"Yes - I know it; but how vexatious it is.  Just because I can't know, I all the more want to know." 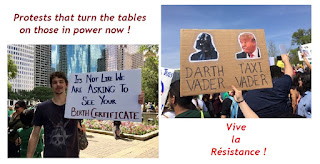 M. Lopez: -
Protesting his taxes over his abuse of power to unilaterally bomb Syria is the definition of lib-tard.
-------------------------
M. Butler: -
This march was planned MONTHS ago. Finding fault with it and calling names is not very productive use of YOUR time. What are YOU marching for?
-------------------------
M. Lopez: -
It's frustrating to see all this energy misdirected... It's just another wasted opportunity for real change. Progressive and liberal movements should focus on real issues like holding accountable war criminals and restructuring the DNC who's truly responsible for Trump... Taxes and Russia ties are non-issues that will get us nowhere...
-----------------------------------
H. Gugsa: -
===>Mr. Lopez,
You must be the wolf in sheep's clothing who is an expert at deflection, dissension, and frustration. You sow doubts everywhere and you pooh-pooh everything ... and when you're done with your secret mission, there won't be any resistance movements of any kind left in this country.
Keep up the good work!

The Ethnostate! ~~ by TPO

Recently, I learned a new term from some radio program: "Ethnostate."

From what I gathered, I think it means something like apartheid.
The Wiktionary definition is ===> A political unit that is populated by and run in the interest of an ethnic group.