Recently, I spoke my mind honestly when I posted something on Facebook about a politician running for the presidency, and I questioned his intelligence.   I said, in essence, he is a "pendejo".*

An old high-school classmate, now an old wealthy socialite, was up in arms calling me a "hater" and everything. Then she sent me a pm that I should refrain from posting my "liberal" views because she does not like seeing them in "her" Facebook.

She said if I continue this way, she might have to "unfriend [me] at least until after the elections."

I decided I will save her the bother ... I "unfriended" her on the spot. 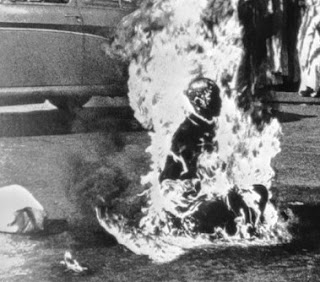 In part, I think, Republican leaders brought this on themselves. Over the decades they pried open a Pandora’s box, a toxic politics of fear and resentment, sometimes brewed with a tinge of racial animus, and they could never satisfy the unrealistic expectations [of smaller government] that they nurtured among supporters.
....
[An] echo chamber deluded its believers to the point that it sometimes apparently killed them. During the 2009-10 flu pandemic, right-wing broadcasters like Limbaugh and Glenn Beck denounced the call for flu shots, apparently seeing it as a nefarious Obama plot. 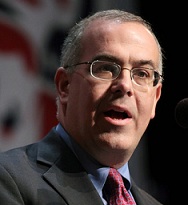 ..., a resilient sense of optimism. To hear Sanders or Trump, Cruz and Ben Carson campaign is to wallow in the pornography of pessimism, to conclude that this country is on the verge of complete collapse. That’s simply not true. We have problems, but they are less serious than those faced by just about any other nation on earth.

People are motivated to make wise choices more by hope and opportunity than by fear, cynicism, hatred and despair. Unlike many current candidates, Obama has not appealed to those passions.

No, Obama has not been temperamentally perfect. Too often he’s been disdainful, aloof, resentful and insular. But there is a tone of ugliness creeping across the world, as democracies retreat, as tribalism mounts, as suspiciousness and authoritarianism take center stage.

The "MarcoRoboto" Moments - by TPO 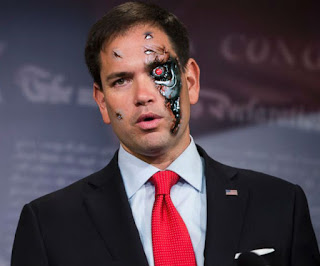 CHRISTIE:  That's what Washington, D.C. Does. The drive-by shot at the beginning with incorrect and incomplete information and then the memorized 25-second speech that is exactly what his advisers gave him. See Marco, the thing is this. When you're president of the United States, when you're a governor of a state, the memorized 30-second speech where you talk about how great America is at the end of it doesn't solve one problem for one person. 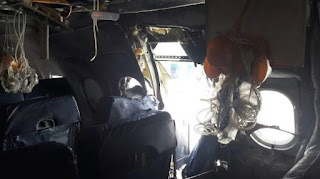 Passengers on a Daallo Airlines flight leaving from Mogadishu were subjected to just about the most terrifying experience imaginable on Tuesday as a bomb exploded in the plane's passenger cabin somewhere above 12,000 feet. The bomb only created a relatively small hole in the plane's fuselage, however, and the aircraft was able to return to Mogadishu and land safely.

Somali authorities now believe that they know who carried the bomb onto the plane and detonated it: A man who was then sucked out of the hole in the fuselage and became the attack's only fatality. (Only two minor injuries were reported among other passengers and crew.)

From CNN: The man sucked out of a Somali airliner after an inflight explosion has been identified as Abdullahi Abdisalam Borleh, an elderly Somali national, Somalia officials said Friday.

Investigators suspect he carried a laptop computer with a bomb concealed onto the plane, according to a source familiar with the investigation.

One can only hope that Borleh, who is believed to have been acting in affiliation with the al-Shabaab jihadist terror group, was conscious for long enough to understand just how ironically his attempt to murder more than 70 people had gone wrong. 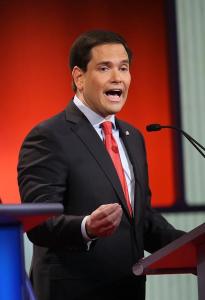 Didn't he [Rubio] also say some time back that he wouldn't mind sitting and having a beer with Malala Yousufzai, the young Pakistani Nobel Prize winner?
At least three things wrong with that picture ....
One, she is a moslem (alcohol is forbidden) ...
two, she is an underage female and he is almost middle-aged ...
and three, he presumes that he is doing her the greatest honor by sitting with her!
===  How embarrassingly stupid can you get ?!  ===
------- ##### ------- ##### ------- ##### ------- ##### -------
* recently posted on Facebook and caused the following reaction from a "friend" who wrote the following ...
<<
Henock:  why are you such a name calling hater?? Your political posts are offensive! Do you think this hate tactic will change any minds?! Or do you post them to impress your fellow extreme liberal 'friends'??? Why don't you post POSITIVE ideas by your liberal candidates instead of hateful name calling personal attacks against Republicans???Name calling is the lowest level is [sic] debate. >>
---------------------------------
This was followed by a private message threatening to "unfriend" me if I continue in this manner in the future.  I started getting visions of being banned from posh and exclusive country clubs. So, I promptly and unceremoniously beat her to the punch ... I unfriended her. As we say in Ethiopia: Less beans, Less fart!   " ባቄላ ቢቀር ፈስ ቀለለ !! "