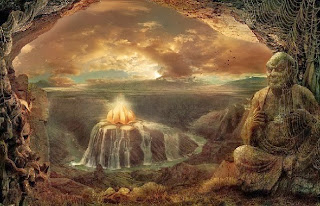 Through most of my not-so-eventless life, I have often wondered about the nature of people ... the good, the bad, and the horrible. In which category would a stranger on a street actually belong? Or even people I know to any degree? Even more important, where do I, myself, put myself? Of-course, the sanity or soundness of my finding (pronouncement) will depend on my own psycholigical sanity.
Be that as it may, I have arrived at some plateau of thought on the matter, and I hope I am sane and wise in my conclusions.

A person who is good and who thinks good of others is, by my definition, a person without guile. In some quarters, such a person is considered naive, gullible, or even a fool. Such a person is often blissfully bereft of all suspicions, greed or selfishness that other people carry around with them. To be sure, a good person is cheerful, optimistic, and kind despite all adversities and challenges. While such a person is almost always disappointed by the behavior of others, yet he (she) stays non-judgemental and hopeful things will improve some day for real.
Needless to say, you will be hard up to find good people amongst politicians, bankers, and policemen.

Off-hand, I would put most of humanity in this category, and I am not being pessimistic or harshly judgemental. This is where Darwinism dwells. If any good is seen anywhere, it is largely due to self-interest and/or sheer survivalism. This is also the region where any exceptionalism or genius in human capacity for knowledge and good work is tainted by the rule of the few megalomaniacs, misanthropes, and the criminally stupid. On other less egregious levels, we see difficult hurdles to humanity's welfare such as petty grudges, malicious envy, and garden-variety schadenfreude.

God help us with this one. It usually creeps up on us unawares. I mean, for example, from where did Hitler, Idi Amin, Lon Nol, Mengistu, and other monsters spring forth? But they are only the luminaries of evil. I am sure everybody is aware (unless you are clueless) that there are psycopaths and sociopaths of varying degrees all around us. They are like harmful bacteria that could infect a body (to wit, society) unless we take the necessary measures to stave off our extinction.

Conclusion:
In any snapshot scenario of the world, it is always best to find yourself in the first category, namely the Good! It is definitely better for the mind and the soul to be uncluttered, to be without guile, and to hope and strive for the well-being of everybody. In my opinion, that is the only way we can bring this world as close to Eden as possible.

Email ThisBlogThis!Share to TwitterShare to FacebookShare to Pinterest
Labels: Biographical (Personal), My Scrapbook 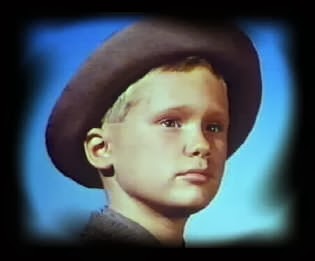 * Appearance on the CBS television show in 1954 .... Only the year before, Brandon became famous for his memorable role in "Shane".

Home on the Range at X-Mas! - by the Cowboy King 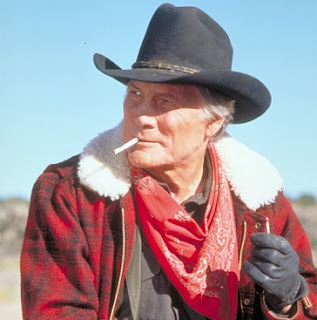 From the Arden Mountains cabin of St. Paul's Poet Lariat, The Bard of Arden, The Cowboy King: "I was bakin' up a fresh batch o' m' worl' famous Christmas Curmudgeon Biscuits (ingredients is whatever's left in the cupboards an' cabinets what ain't movin' too much, an' ain't too green yet, after m' Unsocial Insecurity check runs out fer the month), an' this here pome popped outa m' mouth, an' smack inta the mixin' bowl:

The snow is blowin' roun' the eaves --
Yer buildin' up the fire --
The wind is chasin' autumn's leaves:
We know what YOU desire!
There ain't no quarrel -- Santa's great
An' Frosty makes us sing,
While Rudolph's nose helped haul the freight --

BUT YOU WANT COWBOY KING!!!

...
The Night Before Christmas at M' Home on the Range
...
T'were nigh onto Christmas, an' all 'round m' cabin
Ya c'd hear cactus grow -- warn't a coyote gabbin'.
M' long-johns was propped on a stick by the fire
In hopes that, come mornin', they'd be warmer an' drier.
The Guernseys were dreamin', outside on m' lands,
Nightmares 'bout me milkin' with cold mornin' hands.
M' horse slept indoors, an' the cabin smelled rank. It
Were so cold outside, me an' him shared the blanket!
When above, on the shakes, I heard hoof-beats skedaddle.
I unholstered m' guns -- somethin's scarin' the cattle! --
Threw open the door, stood out on the porch
Barefoot, buck-naked -- jes' m' gun an' a torch.
The moonbeams that marched 'crost m' spread single-file
Showed the snow was nbroken fer mile after mile.
"Some ruckus," I shrugged. "Jes' the wind in the sage" --
When 'crost the night sky comes the overland stage!
(Well, m' seein's no good -- ain't no cause to lodge pity --
Lost m' specs playin' blackjack in Dodge City.)
Overhead the stage twirled like a big wagon wheel,
An' I reckon I felt like a buzzard's next meal.
My eyeballs improvin' as each swoop it nears,
I c'd see the stage pulled by some strange-lookin' steers!
They ambushed m' ranch like a hound'll rout grouse --
Tore a wall off the barn, an' knocked down the outhouse!
Like a tumbleweed skitters which way the wind blows,
Them varmints was loco (an' believe me, I knows!).
An' then, from above me, I heard m' roof groan,
An' I figgered m' ceilin' would drop like a stone.
I yelled m'self raw, over jangles and jingles:
"Git that stage off m' roof! Git them steers off m' shingles!"
When, from somewheres behind me, I hears some galoot
Crack out "Pipe down, son!" as the room filled with soot!
He'd clumb down m' chimney, this greenhorn so rude,
An' one look at his rig said it all: "He's a dude!"
His face was all whiskers -- in a bag was his gear --
His red suit must mean he was huntin' fer deer.
He looked so danged silly, I guffawed through an' through,
But I stopped when he said, "Son, yer skin's turnin' blue."
I'll admit it looked strange -- didn't take much more proof
Than me standin' buck-naked, eight steers on m' roof.
"M' brain must've friz up clean through to the marrow.
'Scuse m' bad manners, sir," an' I doffed m' sombrero.
I asks, "Where ya from, Gramps?" an' the dude says, "Up north."
(Guess them Montana folks don't care how they go forth!)
"I'll be drivin' all night," he said, "last light t' first.
It's hard on ol' codgers -- but on reindeers it's worst.
So I'm askin' a favor, an' I hopes you agrees:
Lemme borry eight longhorns t'night, if ya please."
"Ya got grit, dude," says I, as my six-guns I cock,
"Bustin' up m' home spread, an' now rustlin' m' stock."
"That's all been repaired," said he, scratchin' his nose.
With a last "Much obliged!" up m' chimney he goes.
I were seein' dang good then as I recollects;
That greenhorn done gimme a new pair o' specs!
I looks out, an' sees a new barn in the fog;
In m' new privy sits a fresh Sears catalog!
But I still was uneasy -- them longhorns was prime,
An' fer reindeers I couldn't git nary a dime.
"I'll be back afore dawn," says he, slappin' the traces,
An' next thing I knowed, they whooshed over the mesas!
But I heard him shout out, as his stage cleared the moon:
"Happy trails t' ya, cowboy, 'til we meet again soon!"
_______________________________________________
*Source: Bulletin Board, St. Paul Pioneer Press, 12/23/13

Email ThisBlogThis!Share to TwitterShare to FacebookShare to Pinterest
Labels: Humor, My Scrapbook, Poetry

The Story Behind StoryCorps - by MPR/Daily Circuit

The Story Behind StoryCorps
by
MPR/Daily Circuit

Dave Isay * : StoryCorps [started in 2003] grew out of a very a simple idea - we wanted to provide Americans of all backgrounds and beliefs with the opportunity to record their life stories. We built a soundproof booth in Grand Central Terminal and invited people to come in pairs and interview each other about their lives, with the help of a trained StoryCorps facilitator. Soon after starting the project, I knew we had created something pretty powerful. Many StoryCorps participants tell us that the forty minutes they spend inside our booth are among the most meaningful minutes of their lives. We hope to grow StoryCorps into a national institution that touches the lives of every American family. ....

We've recorded more than 30,000 interviews with more than 55,000 participants in all 50 states and archived them in the American Folklife Center at the Library of Congress ....

The most important thing that StoryCorps does is offer our participants a safe place to open up and talk about their lives....

In 30,000 interviews, we've had every imaginable kind of person participate—from prisoners at the Louisiana State Penitentiary (where we were recording last week) to members of Congress and even a U.S. president. Because these interviews provide the opportunity to leave a legacy in 40 minutes, most people talk about the great themes of human existence: birth, death, and love ....

I'm wary of being nostalgic. I do believe that listening and recognizing our shared humanity is important at any and every time in history—and that if we as a country spent a little more time listening to each other and little less time shouting, we'd be a better, more thoughtful and more compassionate nation.

The Story of Myra and her mother: 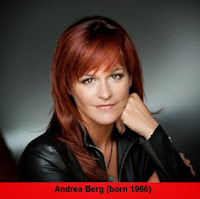 This video is especially dedicated to my brother Haile S. Gugsa. 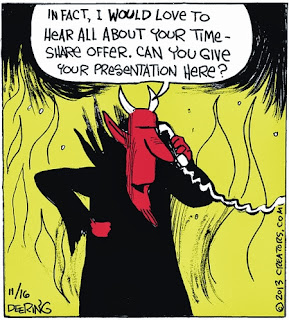 * John Deering was born, lives and works in Arkansas. "Strange Brew" is one outlet for his creative sense of humor and quirky view of life.

"I slipped, I stumbled, I fell!" - by Elvis Presley 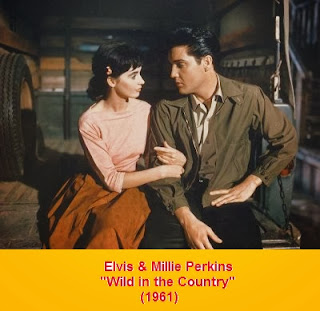