Mahbuba, a Love Story - by TPO 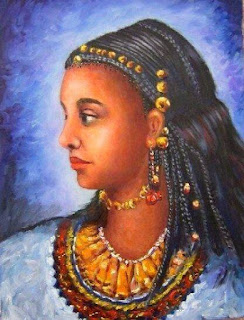 Mahbuba, a Love Story *
- by TPO -
Mahbuba – An African slave girl who won the heart of a
German Prince

She was born in 1820 in Guma, a southern regional state of Ethiopia.  Her parents named her “Bilillee” which literally means well-shaped or pretty.  But she later came to be known as Mahbuba which means 'My Beloved' in Arabic.

In 1835/36, when she was 15, a civil war broke out around Guma and she lost her father and six brothers.  As her village was burned to the ground,  invading captors grabbed her, her sister and her mother and dragged them away as slaves.

Mahbuba was first taken north to Gondar, then soon after to Khartoum.  After that, in 1837, slave traders took her to Cairo.  There they hoped to sell her to the highest bidder among the rich sheiks and princes that happened to be in town.

[As fate would have it,] ... it so happened that, in 1837, Prince Hermann Furst Von Puckler-Muskau of Germany was traveling thru North Africa.  While in Cairo, he went to the slave market, a popular venue for tourists.  There he saw and was instantly struck by the beauty of the young Ethiopian ‘slave’ girl for sale.  He immediately bought her, disguised her as his Mameluke boy, and took her with him on his travels.

The prince became completely besotted by Mahbuba as they continued their travels together through Palestine, Syria and Istanbul.  He was [simply mesmerized] by her natural grace, and eagerness to learn Western ways.  For her part, Mahbuba appeared to enjoy the novelty of her new and totally un-imagined life.

When they arrived in Europe, they stayed in Budapest for a while; and there, Mahbuba received Holy Baptism.  The Prince sent her for a time to the best convent school in Vienna, where he asked the nuns to teach her European ways.  But to their surprise, she soon delighted them all with her natural grace and intelligence.  It was said that Mahbuba could light up any room she entered with her smile.  It also quickly became clear that she had an aptitude for languages as it took her no time at all to be fluent in Italian and German.  She was delightful company, and she was naturally polite and kind as well.  High Society was enthusiastic to entertain the Prince and his ‘princess’, and to be regaled by Mahbuba’s exotic beauty. She was the toast of Vienna, written about in the newspapers, and always the subject of enthusiastic conversation. When she was presented to the Emperor and his royal court, she was applauded.  Everyone loved her.

Sadly, it was soon discovered that Mahbuba could not get acclimatized to the damp and cold European climate.  At some point, she was diagnosed with tuberculosis, and her health started to decline.  As the Prince had to urgently go on a brief business mission to Berlin, he instructed their doctor to give Mahbuba the best of care.

Two days after the Prince’s departure, on October 27, 1840, a servant drew back the curtains in Mahbuba’s room and found her mistress dead.  She had died alone, a slim tiny figure in a large bed.


Mahbuba was buried in the local cemetery, marked by a large stone-shaped sarcophagus, with a single word: ‘Mahbuba’.  The grave-site is visited by thousands of people every year.

TO: All Oromos (or cries for Oromiya)

I prefer to think that Mahbuba was a girl of legendary beauty and charm from Guma in the southern part of Ethiopia.  I don't know why you bother mentioning Oromiya ... there never was any such country in the recorded history and geography of the world.  There are no statues (monuments), historical relics, or manuscripts of "Oromo" history.  The people who are asserting themselves as members of an Oromo nation don't have any alphabet of their own to enable them to write, to read, or to promote their culture, such as it were. 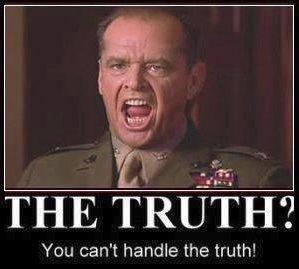 Scapegoating and Misdirection
- by Hénock Gugsa -
~~~~~~~ // ~~~~~~~
Mel W. on Facebook today (3/25/16) :-
" Why are Independents and Democrats registering as Republicans? I'm independent and I'm fed up with massive debt, Illegal getting benefits before veterans, 22 veterans commit suicide a day, lengthy wait for Hospital Appointments, over 3 year wait for benefits, illegals get them immediately. If you have a low paying job or do not have a job the cause is illegal immigration. This country is on the verge of bankruptcy. They'll be a time when this country cannot borrow any more money and the Federal Reserve can't print anymore. Top 20% of earners pay 84% of income tax. Top 1% Pay 24% income tax. What would you do when they leave the country or businesses leave? Or should I say along with the business that has left due to government regulations. That will be the end of the free stuff. "

My Response to Mel W. on Facebook
~~~~~~~~~~~~~ // ~~~~~~~~~~~~~
I see a lot of scapegoating and misdirection in the arguments given above.  You do not provide any actual statistics of how many "illegals" take advantage of benefits here in the United States.
==> What benefits are easily (freely) gotten or given in this country?  If "stuff" were free, why then do we see so many homeless people and unattended veterans?!
==> Why do "illegals pour into this country" ?!  It's certainly not because they are given dirt-paying jobs by exploiters who are not paying employer taxes or employee benefits to these "illegals".
===> On the other side of the equation, there are bureaucratic inefficiencies, and there is  the big, big problem of "waste, fraud, and abuse" of government whether it is run by Democrats or Republicans.
===> What about the unjustified, never-ending military adventures in foreign lands that have so far cost us 3 or 4 trillion dollars?!
===> And about the tax-paying sectors in this country ... are the top 1% really paying income tax? .... And are they really investing in corporations that create jobs right here in the U.S.A??  Have you seen any proof of wealth trickling down to the lower rungs of society?
===> Wasn't the relaxing of regulations the main cause behind the recent Wall Street crisis?
===> You talk about "the end of free stuff".  For the majority of Americans, free stuff has been a thing of the past for a long, long time.  At the same time, I am sorry to say that nothing has ever really ended for the very well-to-do in this country!! 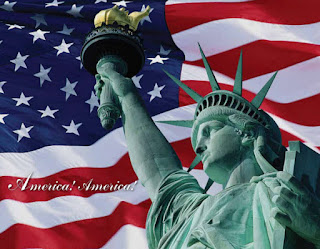 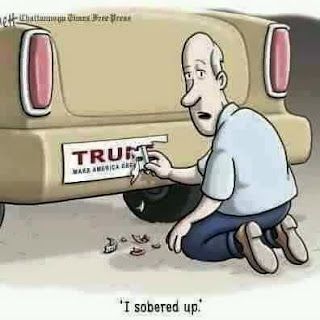 I disagree, Donald Trump is not an idiot.  But, anybody who follows him is.

Trump is a very clever, dangerously clever sociopath who knows what he is doing every step of the way.  He comes from a marketing background, where public sentiments are gauged and also guided to certain desired goals of the marketer.  Everything is calculated, everything  is business, and morality or conscience have no place in the general scheme of things.

What is the main product Donald Trump is peddling? -  R a c i s m !!!
And what is racism? ....  It is a virulent social sickness not unlike alcoholism.  It can be passed from generation to generation thru familial and societal nurturing. There are merchants of racism just as much as there are liqueur salesmen or bartenders.  There is absolutely no question that Donald Trump is an unabashed practitioner and salesman of racism.

To date, no one has yet challenged Donald Trump with serious and concentrated effort.  He is being dismissed or underestimated by the media and those with political power or influence.

The war on racism needs to be waged anew.   Battles must be fought on all fronts daily and without letup.  We should never give in to fatigue or despair.  In particular, the battle with Trump must be fought with focus because he is not an idiot!

"Down by the Salley Gardens" - by William Butler Yeats 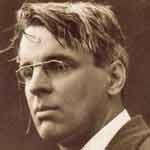 Down By the Salley Gardens
by William Butler Yeats
~~~~~~~~~ // ~~~~~~~~~
Down by the salley gardens
my love and I did meet;
She passed the salley gardens
with little snow-white feet.
She bid me take love easy,
as the leaves grow on the tree;
But I, being young and foolish,
with her would not agree.
In a field by the river
my love and I did stand,
And on my leaning shoulder
she laid her snow-white hand.
She bid me take life easy,
as the grass grows on the weirs;
But I was young and foolish,
and now am full of tears.
"Down by the Salley Gardens"
sung by Maura O'Connell
and Karen Matheson